Well, I think it’s officially fall in Missouri! One day it was over 70 degrees, then a cold front came through, and now it’s 40. The cool crisp temperatures have been anticipated, but when they finally arrived it shocked us all.

This morning my kids wanted to go outside after breakfast. One of my children came to the door in shorts and a T-shirt. “Honey, you need pants to go outside. It’s a little chilly out there.”

She reluctantly went to change. Seconds later, the older children were asking for hats and gloves. Within a few minutes, my child who was dressed for summer suddenly looked as if it had snowed outside. She was bundled in her winter coat, hat, gloves, and a scarf. Though I thought it may be overkill, I let them go outside dressed for the snow.

While I know my child still needs to learn the appropriate clothing to wear for the weather, I realize that change, even when expected, takes some time to adjust. 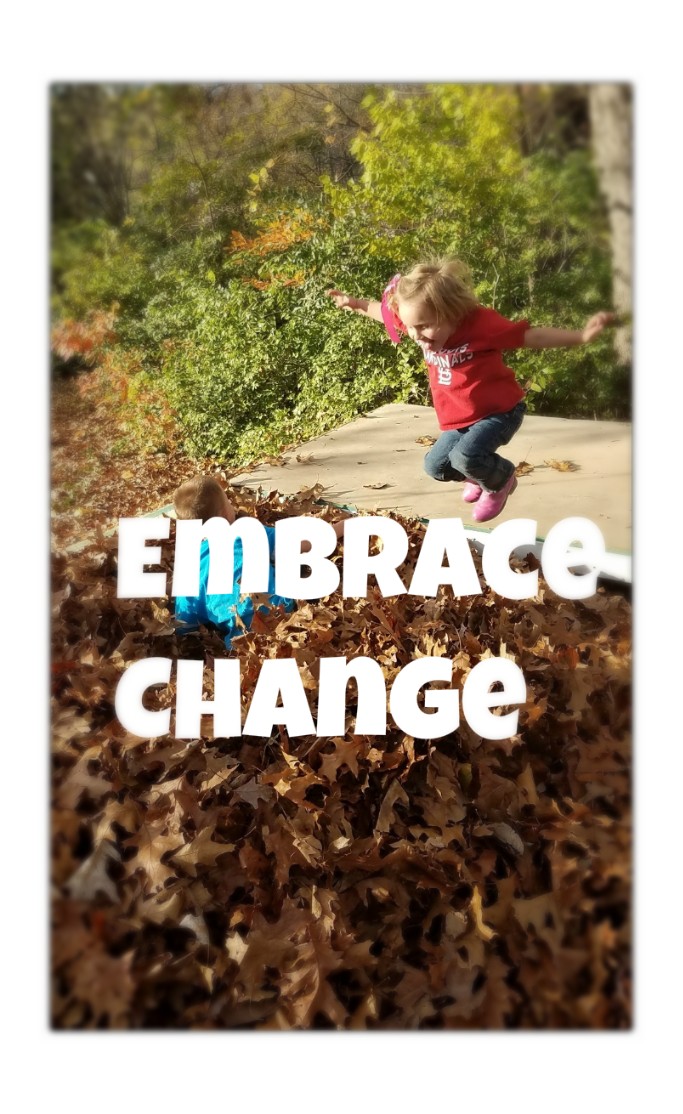 Now I will admit, I have struggled with change. Especially when it came to my Walk with Christ.

I grew up in a very traditional church. I held onto those traditions, without fully understanding the reasons behind those traditions. They were habits, not time set aside to grow closer to God.

Attending a different type of church felt all kinds of wrong. I was used to a certain order. I was used to certain songs. I knew exactly what to say and do and when to do it. It was comfortable.

However, these new churches we were attending, were not. First off, they gave us coffee when we entered and offered a time to talk to each other before service started. I was used to just blending in, coming and going without having to talk to a bunch of people.

They usually started service off with a band or a group of people jamming out and worshiping Jesus. I was used to traditional songs at set times throughout the service.

Then the pastor would give a sermon. These sermons were usually very good, biblical, and practical. However, it didn’t feel like Church. It felt like Bible study.

In my old church I knew what to expect. I knew what to do. Yes, maybe most of the time I was just going through the motions, but I didn’t have to experience that unknown. Nine times out of ten I couldn’t even tell you what songs we sang or what the message was about, but I was there.

I struggled with the change at first. See all my family and friends still attended the traditional Churches. I felt like I was doing something wrong. In fact, for almost a year I didn’t tell any of those people that we were no longer attending that type of service.

As I started seeing a growth in my walk and understanding what it meant to Walk with Christ, I slowly let my guard down. I began to share that we were now attending a non-denominational Church. I began to share the changes that were happening in my life. Surprisingly, no one really cared that I no longer attended the traditional Church.  They only cared that I was going to Church.

I slowly began to recognize the Holy Spirit and His prompting in my life. I became more and more open with my faith and much more willing to share my faith.  Though I knew a change was needed and anticipated that change, it was still uncomfortable. It still took me some time to adjust and share. But as I look back, each change, no matter how long it took me to adjust, has completely impacted my Walk with Christ.

Please know, I am in no way telling you to stop going to a traditional church. Each person is on their own spiritual journey. For some people, they can grow closer to God through traditions. My stumbling block was not the Church or the traditions, but the way I approached Church. I had the problem of just going through the motions that needed a radical change. I needed to step out of my comfort zone and trust God to lead me.

Something I have learned is that God does not call us to be comfortable. I have heard many people say that they believe God wants us to be happy (implying that we should just overlook our sin that makes us happy). But that’s not really true. God doesn’t call us to be happy, but He calls us to be holy. The process of becoming holy, being like Christ, is a life-long journey full of uncomfortable moments and changes.

By embracing a radical change, I found myself experiencing God in a way I never knew was possible. Each day I am growing in relationship with Him, learning more of what it means to be His child, and striving share this with others.

Change may not feel good in the moment, even if you are anticipating it.  But God is faithful.

Being confident of this, that he who began a good work in you will carry it on to completion until the day of Christ Jesus.