I’ve lived in St. Louis for the last nine years, and something happened for the very first time this month… The weatherman got the snow forecast right!!! Granted the snow forecast for St. Louis was 2-10 inches of snow… but we actually got what was predicted.

People in St. Louis really do not count on the weatherman’s predictions. This is why schools do not close until the morning of the snow. People who live outside St. Louis probably think, “St. Louis? Oh, the Midwest- they’re used to all the snow- right?” WRONG!!!

We rarely get snow that actually covers the grass. Instead we get bitter cold winds and icy roads. Please remember- this is the first time in 9 years that the predication was accurate!!! (Unless they were simply calling for a dusting…) So, for those of you not from St. Louis, let me tell you how it works.

A few days before: Snow is in the forecast.

Yeah right? I’ll believe it when I see it.

2 days before: Snow is still in the forecast.

Maybe I’ll go to the store for my French toast supplies- milk, eggs, and bread. But  I still don’t think it will snow.

The day before: Snow is still in the forecast.

Go to the store along with everyone else in the area to get French toast supplies only to find out they are out of milk or eggs.

Day of the predicted snow:

Oh, snow did fall… barely… but the roads are covered in ice. Better listen to the radio and not go out unless I have to… even once the roads are cleared… stay inside where it is warm.

Winter in St. Louis is interesting for sure. You never know what you are going to get. 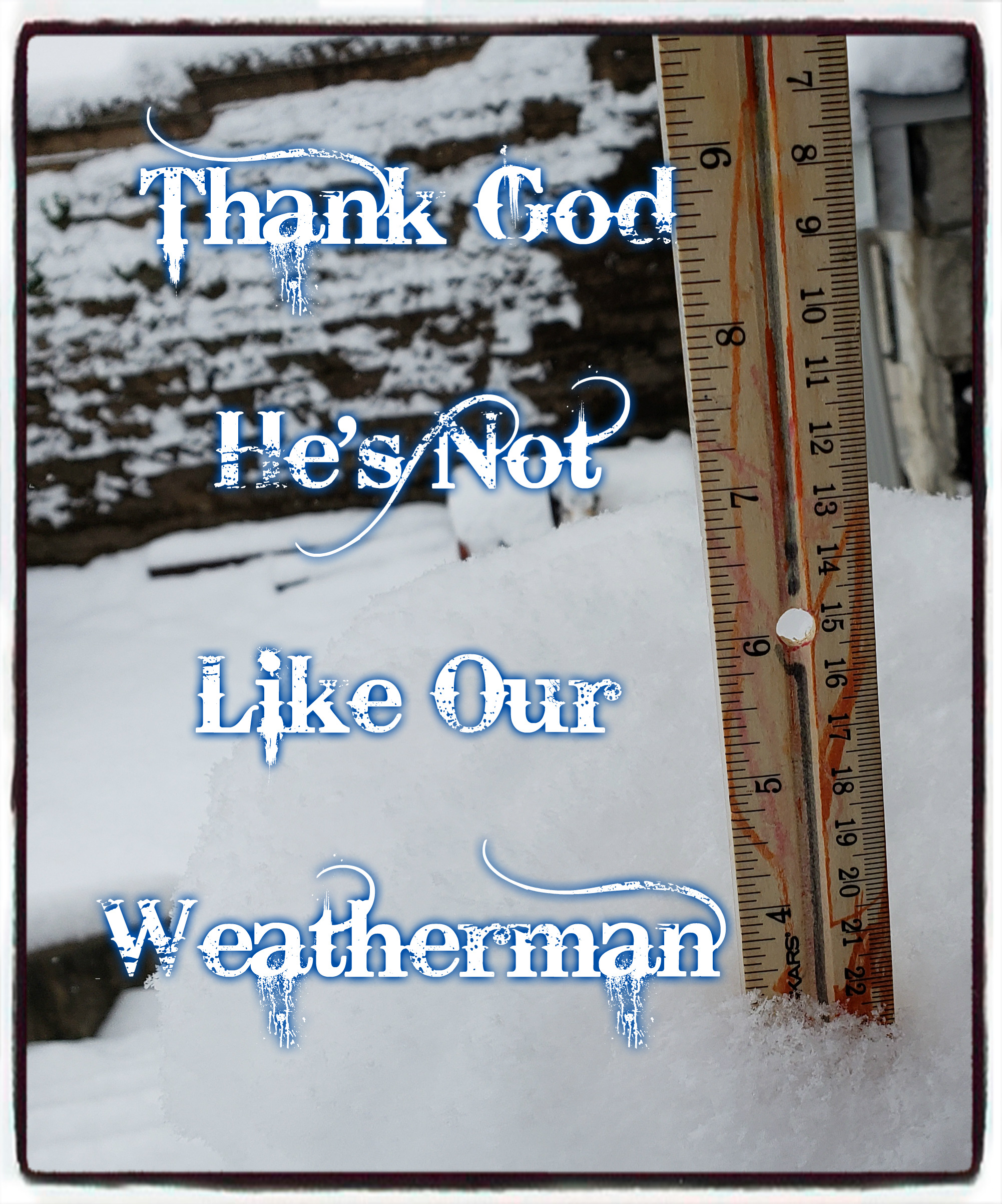 Praise God that He is not like our weatherman! When God speaks, His people should listen.  We can be sure that He is faithful, and His words are true! The Bible is full of God’s promises and His plans to fulfill all those promises.

Just to name a few: Noah- to never flood the Earth again, Abraham- His descendants would be a numerous as the stars, Moses- He would deliver Israel out of slavery, David- to establish his throne.

I am sure that Abraham and Sarah probably felt like God was like our weatherman while waiting for their promised child. Our weatherman was a little vague about the snow fall. 2-10 inches is a huge difference. They were promised a son, but when? They were unsure. Though they tried to get their son through their own scheming, God had a plan. And God did come through at an unexpected time. He gave Abraham and Sarah a son in their old age for HIS glory!

But God’s promises are not limited to the characters in the Bible. He extends promises to us as well!

After man fell in the Garden of Eden, God had a plan to restore creation. That plan was Jesus Christ. Jesus came to Earth as a baby to fulfill the promise God made to Adam and Eve in Genesis 3:15, “ I will put enmity between you and the woman, and between your offspring and her offspring; he shall bruise your head, and you shall bruise his heal.”

God was talking about Jesus! From the beginning He had a plan to save us from ourselves! Because of the work Jesus did for us on the cross, we can have eternal life with God! But there’s even more- we can be in relationship with God while we are living on Earth through the Holy Spirit!

It can be so easy to fall in the traps of the world. The world says build yourself up. The world says you need more stuff- more money, more possession, more, more, more. The world tells you to keep chasing. But Hebrew 13:5 says, “5Keep your lives free from the love of money. Be happy with what you have…” God has said, “…I will never leave you nor forsake you.”

If we have Christ, we have all we need.

We don’t have to wonder if God is telling the truth-we know He is! For those who have accepted Christ, we have the Holy Spirit residing in us! A promise fulfilled and a gift to us all!

God has started a good work in you, and He is faithful to see it out to completion. Trust him.

Now faith is confidence in what we hope for and assurance about what we do not see.