The End of the Thomas Phase

This morning I sat in awe as my boys gave their little sisters all their Thomas the Tank Engine trains saying they do not play with them anymore.  While I watched the interaction occur I felt proud. Proud that they realized they do not need those toys in their room since they do not play with them. Proud that they passed them down to their sisters knowing it would bring them joy. And proud that they had finally realized they had moved on from Thomas and Friends. For a quick moment I felt relief that the Thomas stage was finally over. Then I quickly felt sad.

Thomas the Tank Engine has been a huge part of my house every since my boys brought home the first Thomas book from the library 3 ½ years ago. I’m pretty sure the Thomas the Tank Engine early readers were the first books that my oldest read on his own. After a few months of reading these books, I finally agreed to let the kids use their TV time to watch Thomas and Friends. Before I knew it Thomas, James, Henry, Percy, and Gordan were the majority of conversations, drawings, stories, make-believe play, toys, and games that filled my house with laughter, comradery, and fun for the kids.

I will admit, I wished for this day to come for some time now. (There’s only so much train whistles you can hear in a day that do not actually come from a train.) I had noticed the fade, but to say it is over… it’s bitter-sweet. 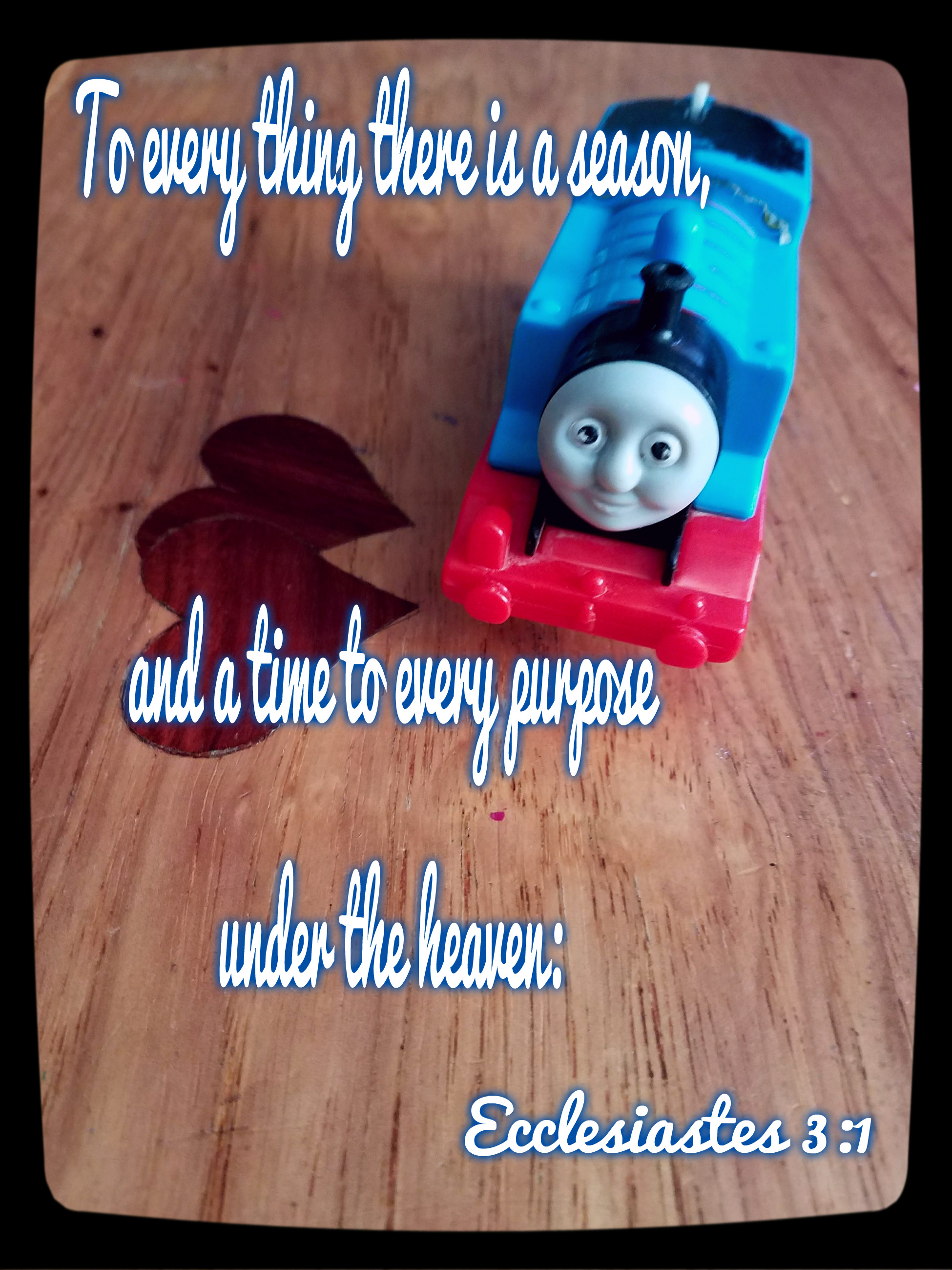 The days of the kids running around in a line pretending to be train cars are over. Pictures that covered my fridge in trains are now replaced by super-heroes. The television shows and games they choose are now so varied and vast that I cannot predict who they are pretending to be as I type this blog.

But for a short period of time, it was predictable. When my kids were playing pretend, I knew exactly which engine each kid was assigned. When they sat down to color, I knew exactly what each kid will draw and which color it would be based off their engine of choice.

My kids grew during this phase. Yes, physically but also together. They had a common interest and supported each other in that interest. I don’t know many young girls who would choose trains over dolls, but my girls did. And I happen to know it is not because that was their preference, but because they wanted to play with their brothers and embraced the opportunity.  They willingly embraced less than desirable characters such as James and Gordon to be part of the Thomas and Friends craze.

I’m sorry to say, this answer is not always yes. I can’t even tell you how many arguments my husband and I got into early in our marriage over the kitchen. Yes, the kitchen… Let me just throw this out there- I was not prepared for any duties in the kitchen when we got married. I seriously had no idea how to even make rice. I joked that if there were not directions on the back of the box, I could not make it. It was not a joke. It was 100% serious. For the first part of our marriage, I made frozen dinners every night. That got expensive fast and did not taste too good either.

Dishes! Oh dishes! To tell you how many arguments we had over the dishes. In truth, it was because I saw dishes and cooking as a chore… not as a responsibility… and definitely not as an opportunity to serve my husband. My heart actually grew to hate dishes, and this caused feeling of resentment towards my husband.

I wish I could tell you there was a switch that went off quickly. That God quickly convicted me of this, and I changed my heart in a matter of moments… but that would be a lie.

It took practice. First, I had to learn to cook. Yes, 26 years old and I had no idea how to make a pot of chili. I had to let go of my pride and ask my husband to teach me. Then I had to commit to doing the dishes without complaining. It took effort, but I put in the effort. Sadly, my works reflected a change, but my heart was still not thrilled about this change.

Then I ran across this blog. (Man, I wish I could redirect it to you, but that was almost 6 years ago.) It talked about how our family includes the most important people in our life, and sometimes we do not treat them like we should. Sometimes we take them for granted. The woman went on to talk about how she made a lasagna for her sick friend’s family. Her kids watched and anticipated eating that lasagna as she cooked it, but then they took it to her friend’s house. For dinner her family ate left-overs. While her family ate dinner she could see the disappointment all over her kids’ faces. The blogger said from that moment on, when she cooked for someone else- she always cooked 2 because her family was more important to her than any other family.

It was a simple blog post about serving your family. But the Holy Spirit used it to convict me. Am I serving my family like they are the most important people in my world? Because they are. The people closest to you shouldn’t get your left-overs. They should get the first serving with room for dessert.

I actually no longer even see the kitchen as a less than desirable role. I am happy to cook dinner, happy to clean up afterwards, and eager to show my love to my family…Probably the same way my girls never saw a problem with taking on the role of James and Gordon. They happily embraced the characters and claimed them as their favorites. It is where they fit into the puzzle and a role they proudly played.

Dear children, let us not love with words or speech but with actions and in truth.   1 John 3:18

Thank you for subscribing.

we respect your privacy and take protecting it seriously